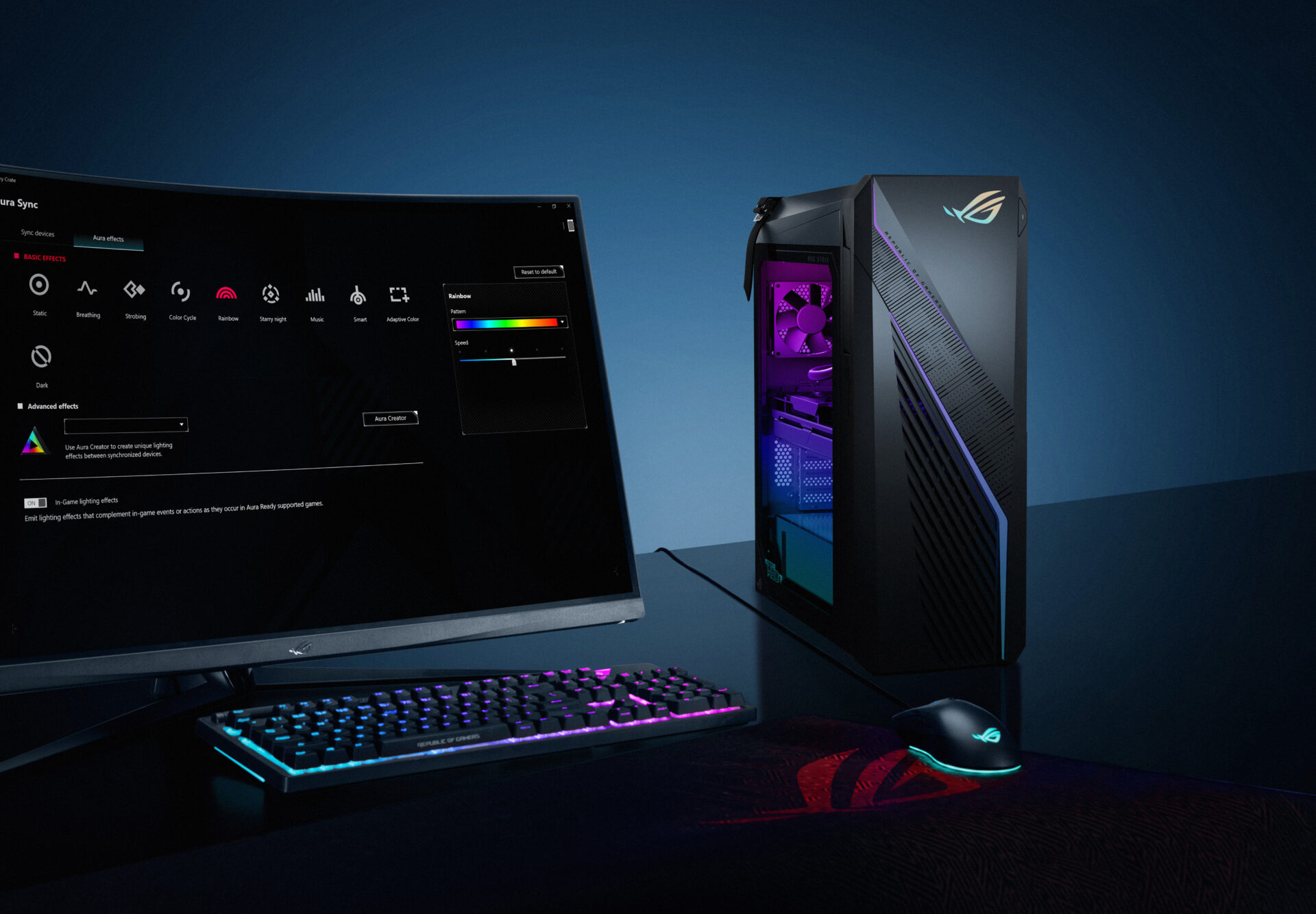 ASUS Republic of Gamers (ROG) is proud to announce its new 2023 desktop lineup, complete with new CPUs and GPUs from Intel® and NVIDIA®, as well as significant redesigns to increase airflow across the board. The all-new ROG G22CH packs competition-ready power into a 10-liter small-form-factor (SFF) frame and comes with either air or liquid cooling. The ROG Strix G16CH goes all-in on both performance and cooling, breezing through the most demanding games without breaking a sweat, while the redesigned G13CH blows away the competition with its new airflow-focused chassis design.

The ROG G22CH proves that size isn’t always everything. This ultra-compact, 10L small form factor PC boasts serious gaming horsepower, but only takes up a tiny spot on a desk. For the first time on an ROG desktop, the G22CH utilizes indirect bias lighting for the front panel, giving the machine a refined yet distinctly gamer personality. Powered by up to an Intel Core™ i9-13900K, up to an NVIDIA GeForce RTX™ 40 series GPU, up to 32 GB of DDR5 4800 MHz RAM and 2 TB of PCIe® 4.0 storage, the G22CH can deliver truly next-generation gaming experiences.

High-end hardware requires serious cooling, so the G22CH was designed from the very beginning with a focus on airflow. It supports traditional air cooling or a custom AIO liquid cooler for the CPU. The ROG G22CH is smaller in every dimension than the previous small form factor flagship, the ROG G21CX Huracan, despite the former having an external power adapter and the G22CH featuring an internal power supply. The ROG G22CH also features a toolless design, allowing for easy access to all compartments and enabling painless hardware upgrades in the future.

The true power of a desktop gaming machine is the mix of flagship components and a careful balance of airflow for consistent cooling. The ROG Strix G16CH has distilled that formula to perfection, thanks to the power of up to an Intel Core i7-13700KF CPU and up to an NVIDIA GeForce RTX 4080 GPU. For gamers who love to multitask, the Strix G16CH boasts up to 128 GB of DDR4 RAM, and for those with large game libraries, 3 TB of total storage capacity plus more room to expand ensures plenty of peace of mind.

The real secret of the G16CH les not in just the raw horsepower of the high-end components, but in its entirely airflow-focused design. Featuring a front panel intake with plenty of access to fresh air, and a nearly identical top exhaust with copious ventilation, the Strix G16CH can easily breeze through grueling gaming sessions without breaking a sweat. As a mid-tower PC, the Strix G16CH can accommodate a traditional air-cooled configuration or a high-performance 240 mm liquid cooler for the CPU. Despite this airflow-focused redesign, the signature ROG design cues that differentiate the G16CH from the competition remain, including the ROG Slash aesthetic, an integrated headset holder, and reinforced double D-ring strap. The ROG Strix G16CH is a familiar breath of fresh air.

ROG desktops have always been at the forefront of gaming performance and cutting-edge style, and the ROG Strix G13CH takes up that mantle. Redesigned for 2023, the chassis now has more airflow than ever, while retaining the curves and angles that make it a uniquely ROG machine. Powered by up to an Intel Core i7-13700 processor and up to an NVIDIA GeForce RTX 40 series GPU, high refresh and high-resolution gaming await. Paired with up to 64 GB of RAM and 2 TB of total storage, this machine is ready to handle gaming, streaming, and whatever else gamers can throw at it.

The G13CH also sees a redesign for 2023, with a focus on airflow. Additional cutouts and air channels match the pathing that make this desktop so recognizable as an ROG machine, increasing cooling performance without sacrificing its ROG identity. WiFi 6E support offers broadband level networking with low latency, even on crowded networks, enabling an esports ready connection no matter where in the house gamers play. For those in search of a shield against their online enemies, look no further than the ROG Strix G13CH.

Republic of Gamers (ROG) is an ASUS sub-brand dedicated to creating the world’s best gaming hardware and software. Formed in 2006, ROG offers a complete line of innovative products known for performance and quality, including motherboards, graphics cards, system components, laptops, desktops, monitors, smartphones, audio equipment, routers, peripherals and accessories. ROG participates in and sponsors major international gaming events. ROG gear has been used to set hundreds of overclocking records and it continues to be the preferred choice of gamers and enthusiasts around the world. To become one of those who dare, learn more about ROG at http://rog.asus.com.