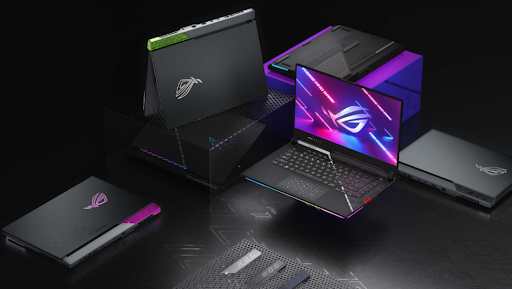 KEY POINTS
* A rising power in esports performance: Be the best on the battlefield with new hardware from Intel ® and NVIDIA ®
* Play hard, stay cool: Conductonaut Extreme liquid metal keeps the Strix SCAR running cool and quiet
* Game on the cutting edge: 360 Hz displays, Hi-Res audio, and Thunderbolt™ 4 round out a state-of-the-art powerhouse
* Flex any style: Armor caps, per-key RGB, and Bezel Glow make for a truly customizable machine

A rising power in esports performance The ROG Strix SCAR is ready to take Windows 11 gaming by storm. Powered by an Intel Core™ i9-12900H CPU and paired with an NVIDIA GeForce RTX™ Laptop GPU with a 150 W max TGP, this machine is designed to keep gamers on top of the leaderboard. Next-generation DDR5 RAM clocked to
4800 MHz and a PCIe ® Gen 4×4 SSD keep the machine feeling responsive and snappy even during intensive tasks. A dedicated MUX Switch helps to reduce latency and further increase performance when gaming by creating a more efficient path from the GPU to the display. Modern gaming laptops route their dedicated graphics through the integrated graphics chip on the CPU, which saves battery, but can introduce a performance penalty. The 2022 Strix SCAR’s Direct GPU mode provides an average performance boost of 15%, with up to 43% in select titles. Gamers can put the laptop back into hybrid mode when battery life is of utmost importance.
The Strix G15 and G17 are powered by up to an AMD Ryzen™ 9 6900HX processor and an NVIDIA GeForce RTX 3080 Ti Laptop GPU at 150 W with Dynamic Boost for similarly high-end horsepower. The entire Strix family lineup is ready to tackle the most demanding modern titles.

Play hard, stay cool
Powerful components need powerful cooling, so ROG has further improved on its Intelligent Cooling™ suite of enhancements. Both the Strix SCAR and Strix G use liquid metal on the CPU for improved heat transfer, but the Strix SCAR has been updated to use Thermal Grizzly’s latest and greatest Conductonaut Extreme solution. This high-end thermal compound lowers temperatures by up to 15° C compared to traditional thermal pastes, delivering higher sustained boost clocks and preventing the fans from ramping up as quickly for reduced noise levels. The 84-blade Arc Flow Fans™ use variable thickness blades on all 2022 Strix laptops to improve airflow while reducing turbulence and noise. Up to four exhaust vents allow for plenty of ventilation, and anti-dust tunnels eject dust from the system to prevent buildup over time. And ROG’s 0 dB Ambient Cooling turns the fans off entirely during light workloads in Silent mode, for a truly noiseless experience.

Gaming on the cutting edge
The Strix series is all about top-tier performance, which requires pushing the envelope year after year. This starts with the display: In order to keep track of the action in fastpaced games, a high refresh rate monitor is key to staying one step ahead of opponents. At 1080p resolution, the Strix SCAR 17 offers a
panel with a blazing 360 Hz refresh rate, which is faster than even most competitive desktop gaming monitors, bolstered by a 3 ms response time. Dolby Vision ® HDR and Adaptive-Sync round out the specs on this impressive IPS display. At QHD resolution, the SCAR has made a monumental generational leap, up from 165 Hz to a 240 Hz refresh rate, with the added clarity of more pixels. The Strix G17 features the same high performance FHD 360 Hz and QHD 240 Hz panel options as the Strix SCAR, and the Strix G15 offers up to FHD 300 Hz and 165 Hz display options. In addition, all 2022 ROG Strix laptops include Dolby Atmos support as well as Hi-Res audio support for headphones, ensuring gamers hear their music exactly as the artist intended. To futureproof the I/O, one of the USB Type-A ports has been updated to USB Type-C ® , ensuring the port selection will be relevant for years to come. The 2022 Strix SCAR supports bleeding-edge Thunderbolt™ 4 for blazing-fast file transfer speeds across compatible devices. The Strix SCAR has personality inside and out. The chassis itself exudes power and confidence, starting with the Transparent Palm Rest that gives users a peek into the heart of the machine below the keyboard deck. Per-key RGB unlocks millions of lighting combinations, which can be synced to other ROG
peripherals with Aura Sync software. Whether keeping it simple with a preset lighting profile, or creating a one-of-a-kind work with Aura Creator, the SCAR is ready. Bezel glow underneath the display and synchronization with ROG’s “Fearless Eye” on the lid allows gamers to customize the look of this cutting- edge machine exactly how they prefer. Customization doesn’t end with just lighting control. The Armor Cap on the rear of the Strix SCAR is also
removable, with three unique colors bundled with the machine. Gamers can create their own unique design or download a custom model to 3D print their own as well, to let the world know just who they are. The Strix G15 and G17 offer three distinct color options: the subtle Eclipse Gray, the bold Volt Green, and Electro Punk. The G15 and G17 share the per-key RGB lighting with the Strix SCAR, which can be further customized via Aura Sync.

About ROG
Republic of Gamers (ROG) is an ASUS sub-brand dedicated to creating the world’s best gaming hardware and software. Formed in 2006, ROG offers a complete line of innovative products known for performance and quality, including motherboards, graphics cards, laptops, desktops, monitors, audio
equipment, routers and peripherals. ROG participates in and sponsors major international gaming events. ROG gear has been used to set hundreds of overclocking records and it continues to be the preferred choice of gamers and enthusiasts around the world. Learn more about the choice of champions at http://rog.asus.com.