CHAMPIONS OF CHAOS AND IMMORTAL EMPIRES (BETA) ARE OUT NOW FOR TOTAL WAR™: WARHAMMER® III SEGA and The Creative Assembly Ltd. are proud to announce the launch of Champions of  Chaos and the Immortal Empires Beta for Total War: WARHAMMER III.

Fit for a champion, this Lords Pack welcomes four new Warriors of Chaos Legendary Lords instead of the usual  two, each of whom is aligned with one of the four ruinous Chaos Gods. Embark on campaigns of destruction  with new gameplay mechanics, wreak havoc with over fifty new battlefield units, and experience a brand-new  narrative that will see you rise from pawn to power.

The Champions of Chaos have risen through the ranks thanks to their infamous deeds to become the favoured  of the four Dark Gods, they are; Valkia the Bloody, the deadly but daemonic consort of Khorne. Festus the  Leechlord, the deranged plague-doctor of Nurgle. Azazel, Prince of Damnation, the ecstatic heir of Slaanesh. Vilitch the Curseling, the conjoined sorcerer-twin of Tzeentch. 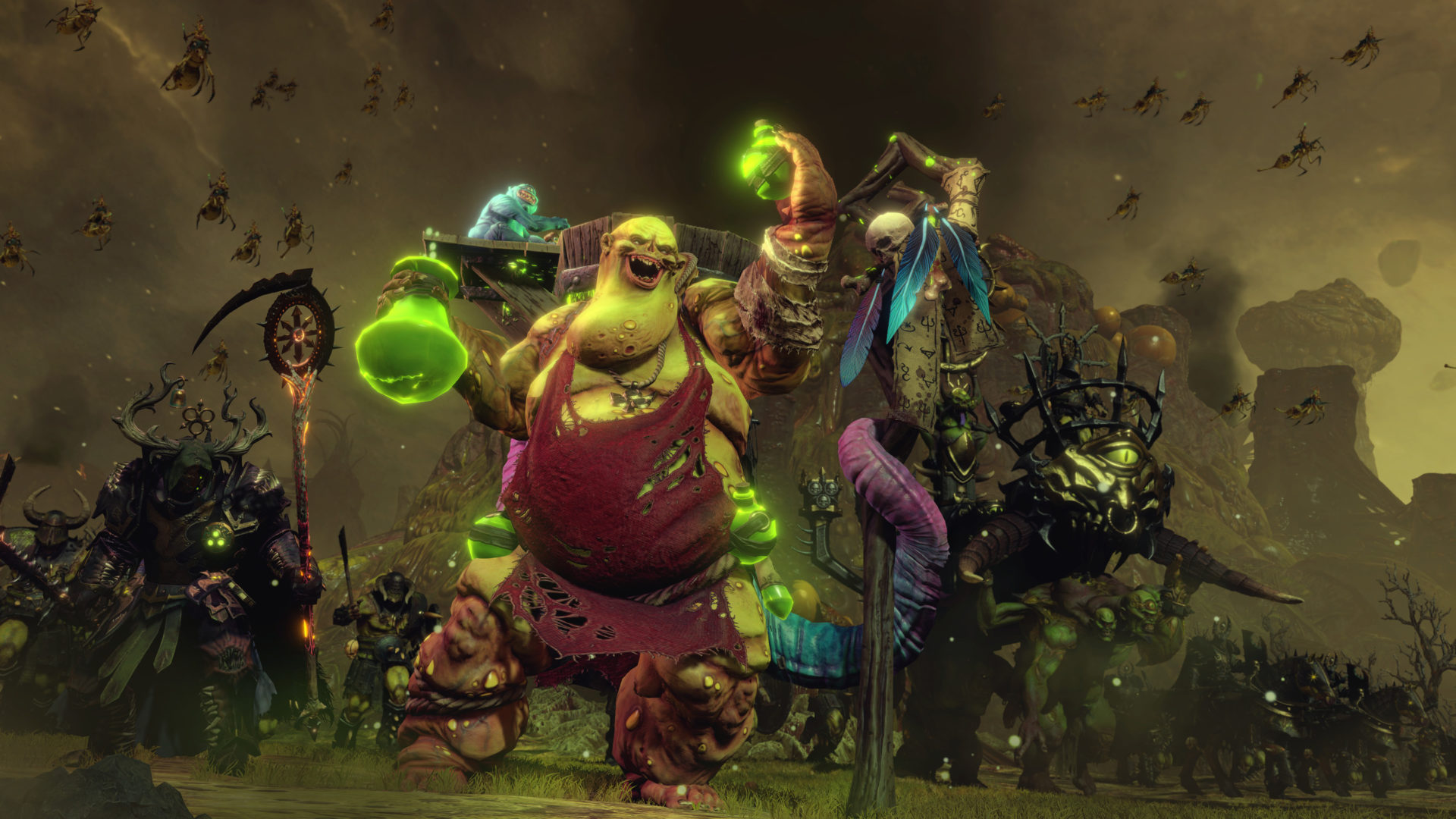 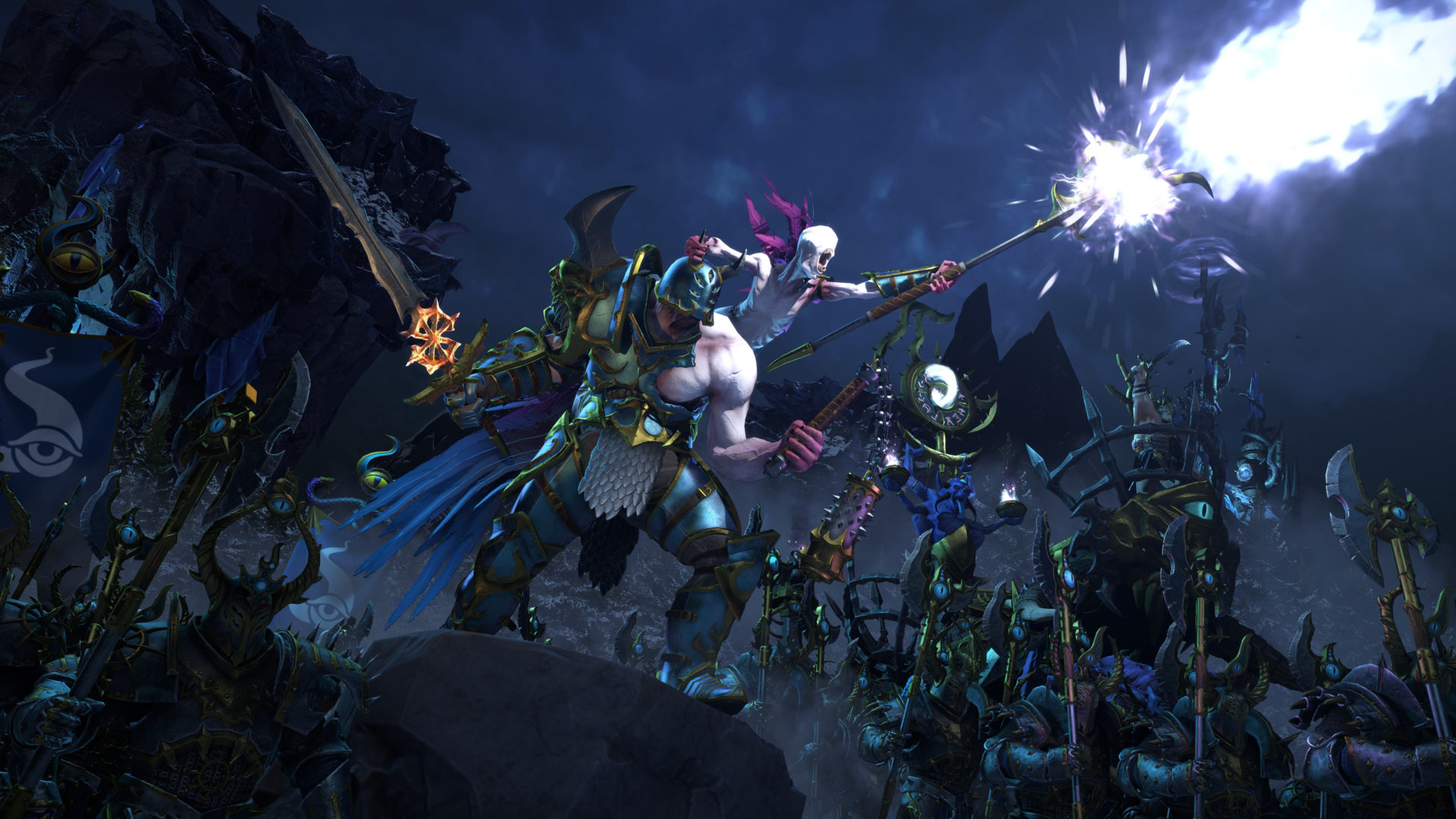 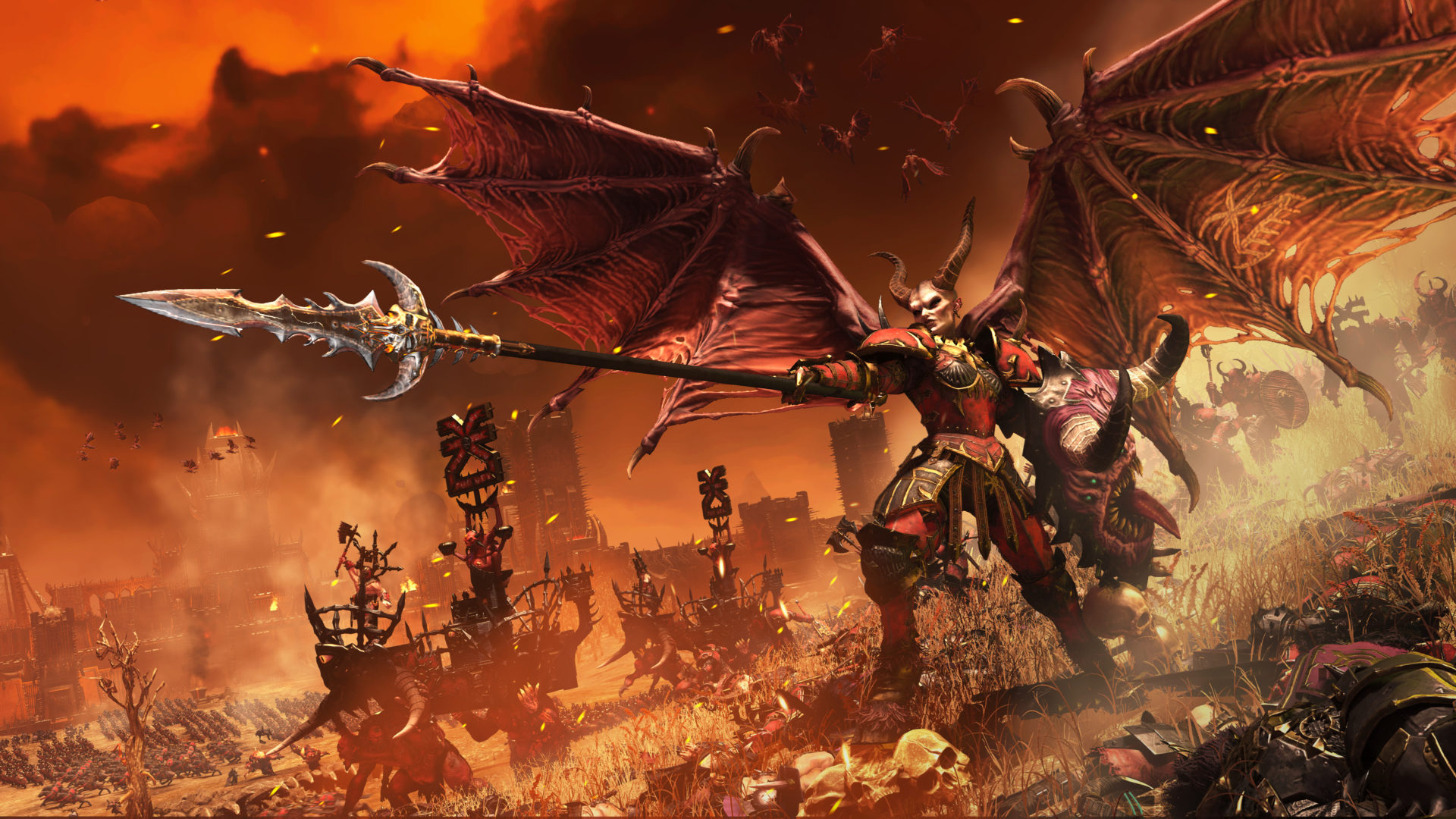 In the ancient arena-city of Zanbaijin, the servants of the Chaos gods have clashed for millennia and the souls  of those who fall in battle are sealed within the Altar of Battle. As a Champion of Chaos, you must earn the  gaze of your master through bloodshed and ritual before taking the arcane power as your own. From there,  the true test awaits.

Charging into bloodthirsty combat alongside their Champions is a diverse host of battlefield units, including the  Warshrine of Chaos which bestows terrible gifts upon those who make the appropriate sacrifice, Chaos Knights  who ride as a wall of blades and spiked armor to crash through the enemy ranks in an explosion of torn flesh,  and the Chosen, an ironclad group of elite slaughterers who form the inner circle of their lord’s warband.

The Immortal Empires Beta is a new grand-scale campaign mode for Total War: WARHAMMER III, free to owners  of all three Total War: WARHAMMER titles. It combines the Legendary Lords, gameplay mechanics, war units  and much more from across the trilogy into one colossal mode spread across the vast Warhammer world. It is  the most complete and definitive Warhammer strategy experience ever conceived.

“Immortal Empires represents the world-encompassing vision we’ve been aiming towards since we first  partnered with Games Workshop, and it’s great to see that become a reality”. Said DLC Director, Richard Aldridge. “It’s the most ambitious game mode we’ve ever worked on and will usher in years of post-release  content for Total War: WARHAMMER III”.

Wage War with Up To 86 Legendary Lords:

Legendary Lords are (in)famous and powerful characters from the Warhammer world who lead your armies on their immortal conquest. Each has a unique playstyle, gameplay mechanics, and hail from one of the 23 wildly  distinct races, from noble High Elves, ingenious Dwarfs, and the imperious dragons of Grand Cathy to the  undead pirates of the Vampire Coast, the mysterious Lizardmen, and the apocalyptic hordes of Chaos.

Immortal Empires represents the most detailed reimagining of the iconic Warhammer Fantasy Battles World.  Encompassing the length and breadth of its breathtaking fantasy landscape, players will conquer a swathe of  biomes from the lush but deadly jungles of Lustria and the inhospitable deserts of the Southlands to the  impassable mountains of Naggaroth and the corrupted Chaos Wastes.

Immortal Empires offers the classic sandbox Total War experience and has several new features and quality of  life improvements, including; Be’Lakor as a playable Legendary Lord, an all-new Sea Lanes mechanic to help  circumnavigate the map, updated mechanics and playstyles for factions introduced in WARHAMMER I & II,  alongside fresh lore-inspired victory conditions for the campaign, new end-game scenarios, and much more.

Blood For the Blood God III:

ALSO releasing today is Blood for the Blood God III. This gory effects-pack brings several mature-rated  animations to Total War: WARHAMMER III such as blood spurts, limb and head dismemberment, blood drenched UI elements, global campaign events that generate greater carnage in battle, and much more. It will  be free to owners of Blood for the Blood God I or II.

With more than 37.8 million copies sold, Total War is one of the most established and critically acclaimed  series in gaming. A drive for historical authenticity and superb gaming quality has helped establish the  franchise as one of the most successful PC games of all time. Alongside the core historical-based games, the  Total War series has expanded to include free-to-play mobile (Total War Battles™: KINGDOM), fantasy epics  (Total War™: WARHAMMER®), and historical snapshots (Total War Saga™: THRONES OF BRITANNIA).  www.totalwar.com

About The Creative Assembly Ltd.

Creative Assembly is one of Europe’s leading games development studios, founded in 1987 and located in  West Sussex, UK and in Sofia, Bulgaria. With a heritage of award-winning AAA titles, including the multi-million  selling Total War™ series, Creative Assembly continues to build an impressive portfolio of games including the  newly announced first-person shooter HYENAS and through world-renowned partnerships; with Games  Workshop on Total War™: WARHAMMER®, Twentieth Century Fox on Alien: Isolation plus 343 Industries and  Microsoft on Halo Wars 2. Creative Assembly has, with their exceptionally talented team of over 800, amassed  a wealth of awards including multiple Best Place to Work awards and accolades from BAFTA, Music+Sound and  Develop’s Industry Excellent awards. www.creative-assembly.com

Games Workshop® Group PLC (LSE:GAW.L), based in Nottingham, UK, produces the best fantasy miniatures in  the world. Games Workshop designs, manufactures, retails, and distributes its range of Warhammer®: Age of  Sigmar® and Warhammer® 40,000® games, miniatures, novels and model kits through more than 500 of its  own stores (branded Warhammer®), the www.games-workshop.com web store and independent retail  channels in more than 50 countries worldwide. More information about Games Workshop and its other,

related, brands and product ranges (including our publishing division ‘Black Library’ and our special resin  miniatures studio ‘Forge World’) can be found at www.games-workshop.com