The “Additional Character Pack” is a series of paid downloadable content featuring several new characters that  can be used in the Versus Mode of Demon Slayer -Kimetsu no Yaiba- The Hinokami Chronicles (both locally and  online). The first release scheduled for this summer will feature Tengen Uzui, the Sound Hashira of the Demon  Slayer Corps who engaged in a fierce battle against demons in the Demon Slayer: Kimetsu no Yaiba  Entertainment District Arc anime. Take a first look at the visual of Tengen Uzui created based on an in-game 3D  model below: 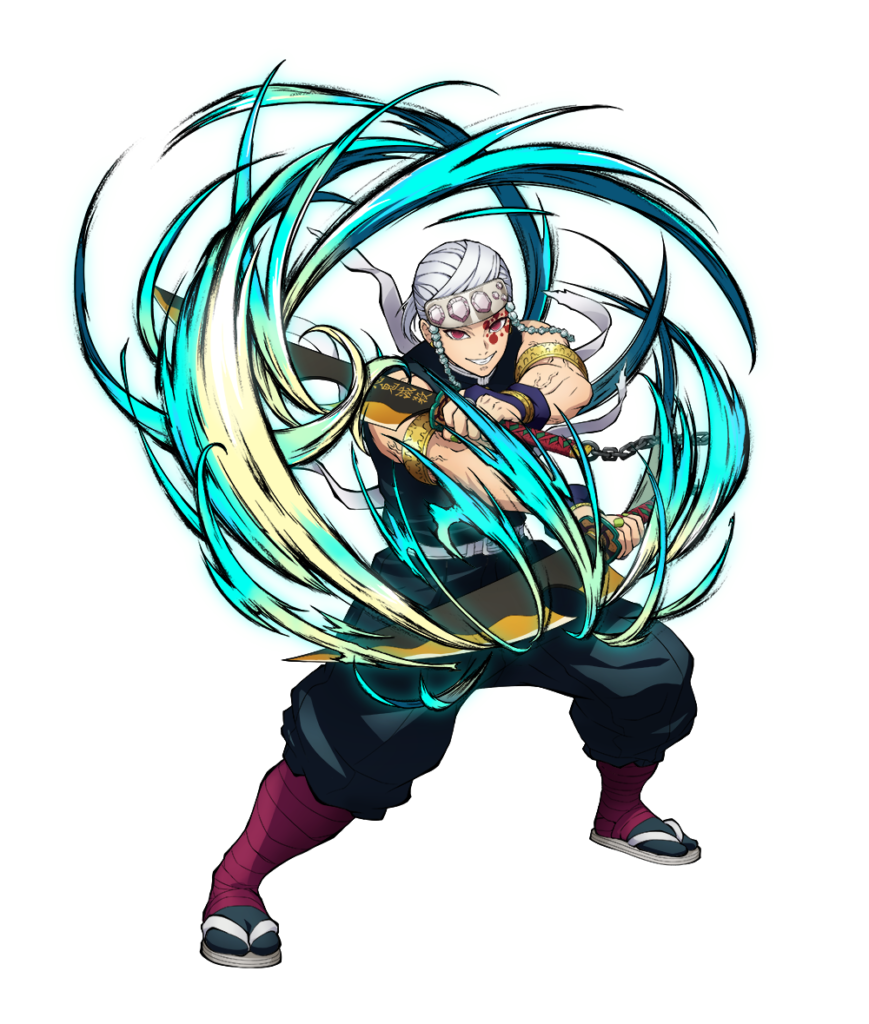 From there, 6 more characters who also appeared in the Demon Slayer: Kimetsu no Yaiba Entertainment District  Arc anime will be available for purchase in a series of periodic updates:

We will have more to share regarding this DLC in the coming months, so please stay tuned.

The Early Purchase Bonus for physical versions (standard & limited editions) available in Asia will include Mini  character illustrations by ufotable. These mini character illustrations will feature 7 characters in total, including  Tanjiro Kamado, Nezuko Kamado, Zenitsu Agatsuma, Inosuke Hashibira, Giyu Tomioka, Shinobu Kocho, and  Kyojuro Rengoku, where they are all playing the Nintendo Switch in either docked or handheld mode.

About the Nintendo Switch Version

Players can choose from 24 characters in the Nintendo Switch version, including 6 new playable characters  added in the updates on other platforms.

The Nintendo Switch version also comes with in-game Kimetsu Points, which can be used for unlocking  characters and costumes, as well as Butterfly Mansion Patient Wear, which was previously released on other  platforms as a bonus in the deluxe edition. The Nintendo Switch version also grants immediate access to the  Kimetsu Academy Summer Uniform Costumes for characters in Versus Mode.

About the Demon Slayer: Kimetsu no Yaiba Anime

Demon Slayer: Kimetsu no Yaiba is a comic masterpiece by Koyoharu Gotoge consisting of 23 volumes. The  comic is published by Shueisha Jump Comics and has sold over 150 million copies in total. Demon Slayer:  Kimetsu no Yaiba anime, created by ufotable, is the animated adaptation of this series.

This adventure exploded in popularity not only in Japan but also around the world, as it portrayed the  heartrending ties between humans and demons and a ghastly swashbuckler while having moments of comic  relief.

*The following items are included in the game from the beginning as bonuses for the Nintendo Switch version. ・ Kimetsu Points (16,000 Points)

*Kimetsu Points can be exchanged for in-game rewards. (16,000 Points can unlock 4 characters.) *A Nintendo Switch Online subscription is required to play online battles in Versus Mode.

*The latest patch is required to access online play.

*Demon Slayer -Kimetsu no Yaiba- The Hinokami Chronicles Original Figurine Device Stand is the same as the one included  in the PlayStation 4 version.