Nmia was honoured to receive an invitation from SEGA and Creative Assembly to conduct the media early access review of “Total War: Warhammer 3”. Let’s take a look at the game and let me share my playthrough experience as a newcomer to the series! 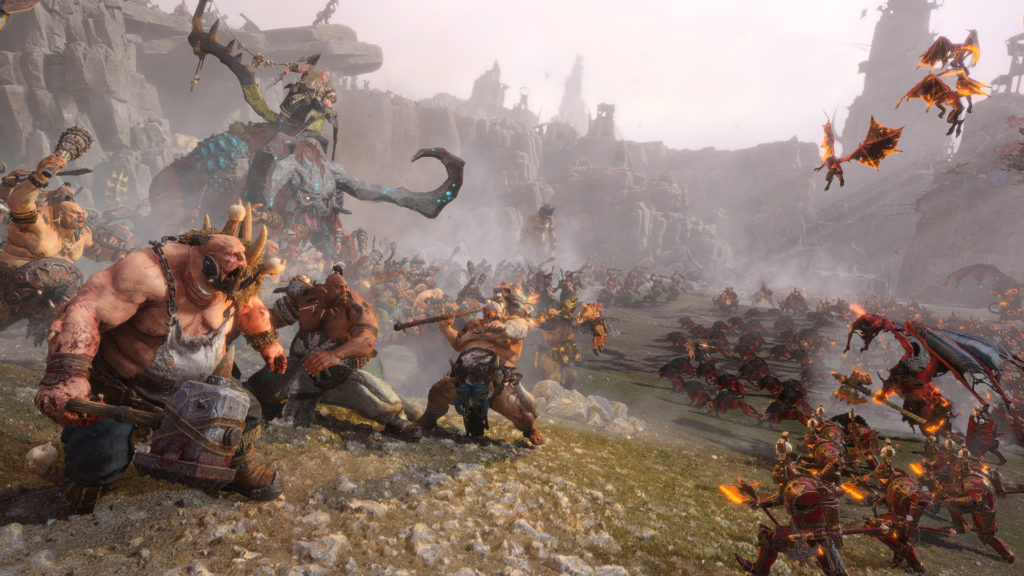 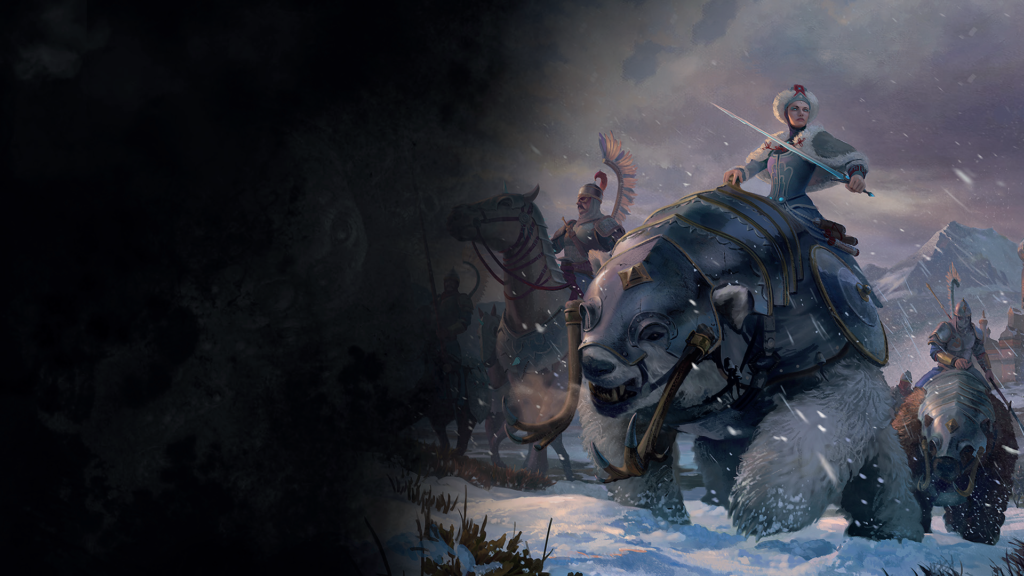 The plot of the game changes based on the selected game mode and individual factions, but the beginning of the story, which is the prologue in the single-player mode, tells a tale about the entrapment of the great bear god Ursun of Kislev and his capture into the Realm of Chaos. In the game, the player needs to manipulate the Tzarina Katarin of the Kislev clan,  and goes into the Realm of Chaos to rescue Ersun. The highly detailed CGI cutscene animation and the engaging combat in the battlefield was used as a carrier, to tell a highly fantasy narrative that was usually expressed in board games and text. 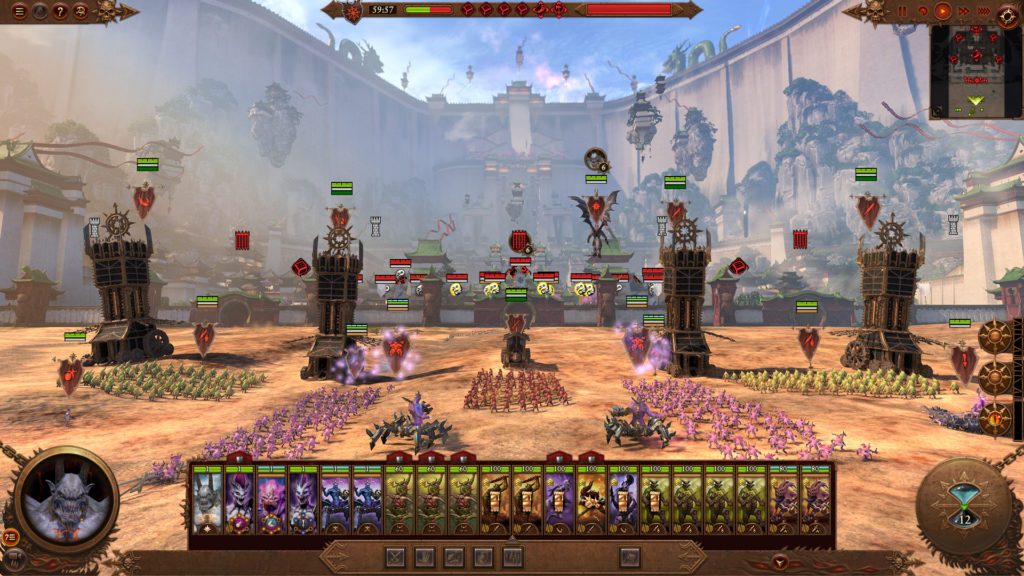 In terms of gameplay, the game utilises most of the systems seen in the Total War Series,, and integrates and optimises the newly added elements in the development of different series of Total War, such as the Diplomacy system in “Total War: Three Kingdoms” etc.

As far as the diplomatic system is concerned, this game has made many improvements on the basis of this system. For example, the AI ​​will immediately tell you how much gold or diplomatic actions are needed to achieve the transaction. Players can also recruit units from the allies through the establishment of outposts on the territory of the allies, so as to build armies composed of different factions, from which to adjust their own forces and composition to cover the natural weakness that comes with each faction. In addition, players can threaten enemies or allies for various diplomatic activities. The greater the strength gap between the player and the enemy, the higher the likelihood of the threat being successful.

Survival is a story-driven, multi-stage, intense battle that is triggered when the strongholds of the Chaos Gods are attacked in the realm of Chaos. In these hellish realms, players will encounter waves of increasingly formidable enemies and need to capture three capture nodes on the map. After capturing these nodes, players will gain combat resources to build defensive structures such as missile towers and barricades, and recruit reinforcements to support the battle.

Storm of Magic battle is an all-new set of combat rules for Total War: Warhammer 3. Magical storms are always active in the realm of Chaos beyond the realm of Khorne. If you’re going to fight a fight there, and it’s not a survival or Quest quest fight, those settings will apply to the fight. These battles reflect the otherworldly nature of the Chaos Kingdom by empowering players (and their enemies) with powerful magical abilities, including infinite magical reserves and devastating Cataclysm spells.

Minor Settlement battles take place in unwalled towns, where defenders must build barricades and towers to fend off attackers. Domination Battle, on the other hand, is a multiplayer-only battle mode. In this land battle, players can gain points against other players by defeating enemies, capturing targets, and strengthening their armies.

In addition, the unprecedented feat achieved in this game is 8-player multiplayer, and it is real-time rather than eight-player turn-based. At the same time, players of the same faction can help each other control individual units, adding a lot of fun and interactivity to multiplayer games. Among them, the multiplayer game also has special plots, namely Something Rotten in Kislev and Darkness & Disharmony, for players to experience a fresh new plot during multiplayer play.

Another precedent for the Total War series is the newly added RPG element, that is, the customization of the Daemon prince. In the Warhammer series, the Daemon Prince has no fixed appearance or form, so the development team naturally added the Demon Prince customization system, adding new and bold elements on the premise of being loyal to the original world setting. The Daemon Prince faction’s tech tree and character skill tree have been merged into an integrated skill tree. New Daemon Gifts can be unlocked when obtaining Daemonic Glory, allowing players to customise the appearance of the Daemon Prince, as well as combat stats. The so-called daemon gift is the “body parts” of the daemon, allowing the creation of a daemon prince that is completely designed by the player. As a newcomer to the series, I think that the best choice I’ve made is to play the prologue first, because the prologue is full of detailed tutorials and tips for the intricately and thoroughly developed system that was formed throughout the series of games. The gameplay felt a bit out of hand as there were too many things to control, but after playing for a while, it felt a little bit easier.

During the game, the editor found that although the single-player game is based on a fixed main line, the player has a high degree of freedom to play, and can establish diplomatic relations with the forces they want, and the distribution and use of money is also very interesting. Money to strengthen your own soldiers is not always the best solution, and sometimes spending a little money to establish diplomatic relations helps saving more resources and prevents unnecessary loss.

There are many details that can be manipulated during the battle, and the more detailed your controls are, the more accurate and low-consumption you can finish a battle, so I basically turned on the slow-motion system to operate slowly during the campaign operation. Of course, when you feel tired or want to save time, you can let the system automatically resolve the battle and go directly to the battle result.

Hero units can carry skills to affect the battle situation, or directly attack the city wall, causing damage to the lord. The army is continuously growing, and the more battles it wins, the stronger it becomes. Elite units that went through many battles with me made me cherish them more as their loss would be permanent, contrary to this being a game that is supposed to constantly fight wars.

Environmental factors have different effects on each faction, and some forces are more advantageous or disadvantaged in a particular climate or terrain. Besides, the city management system is very well made and matured, and gave me the illusion of playing a city management game when managing a city.

As the finale of the trilogy, this work incorporates a lot of bold innovations on the premise of absorbing many of the benefits of the previous work, and then synergistically brings out the essence of the game. The new system is suitable for the gameplay. It adds a lot of customisation elements without feeling out of place. Therefore, the same game can be played with very different experiences and gameplay.Especially in a real-time strategy game customizations are rarely seen. For fans of the series, this game can definitely satisfy their various anticipations and desires for the sequel to the game in the past five years. For newbies, the learning cost is slightly higher, but the development team has worked hard to pave the way for a lot of detailed teaching for new players step by step, accumulating the experience and understanding how the game should be played out.