Embark on a New Journey in Bloodstained: Ritual of the Night as the Child of Light’s Aurora Today 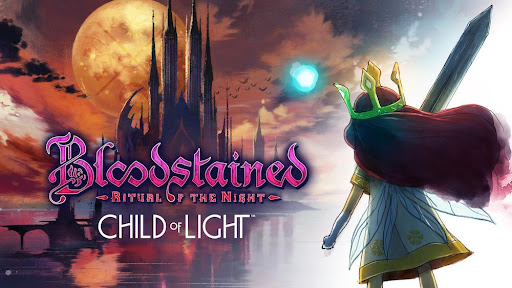 in a free patch launching on March 31st at 9am PST on PlayStation 5 + PlayStation 4, Xbox Series X|S + Xbox One, and PC via Steam, and GOG. The Nintendo Switch version will be arriving on April 21st.

Miriam is no stranger to crossing paths with characters from other gaming series. She’s worn Shovel Knight armor into battle, ridden horseback in the dead lands of Kingdom Two Crowns, faced the horrors of Blasphemous, and guest-starred in Mighty Fight Federation. This time, she’s stepping out of the spotlight and letting someone else explore the Hellhold Castle: Aurora, the Child of Light herself.

After saving Lemuria on her own adventure, Aurora finds her journey home cut short when she awakens in a land full of demons. Her only hope of returning to her friends involves breaking Hellhold’s curse in a new storyline complete with poetic, rhyming cutscenes and dialogue inspired by Child of Light.

Witness Bloodstained’s events from a new perspective by choosing Aurora from the Main Menu. The Child of Light has her own distinct moveset and abilities, making this romp through the castle feel fresh.

Call upon sacred powers to wield the devastating Light Ray and decimate foes with elemental damage. Evolve to meet new challenges and unlock new areas of the castle: gain wings to fly, become an adult to swim underwater, and don spike-proof armor to bypass deadly spikes.

Aurora’s loyal firefly friend Igniculus assists her by healing her, casting slow spells on opponents, and providing helpful passive boosts. Earn experience through combat to level up his abilities so he q can use these spells more often and more effectively.

While Aurora does not have Miriam’s Shardbinder abilities, she can use shards to improve her own skills and access Familiar (passive) and Conjure (active) shards. Each represents one of her lost friends, all with their own powers to aid Aurora on her adventure. Upgrade abilities further with help from Miriam’s friend Johannes using alchemy and items she finds in chests and defeated enemies.

“I feel honored to be able to collaborate with such a prestigious title!” said Koji Igarashi, Artplay co-founder. “Lots of time, effort and coordination have gone into this and I hope you all enjoy Aurora’s active participation.”

Bloodstained: Ritual of the Night is available on PlayStation 5 + PlayStation 4, Xbox Series X|S + Xbox One, Nintendo Switch, and PC via Steam, and GOG.

For more information about Bloodstained: Ritual of the Night, visit the official website.

505 Games, a Digital Bros’ subsidiary, is a global publisher focused on offering a broad selection of video games for players of all ages and skill levels. The company publishes and distributes premium and free-to-play games on console and PC platforms as well as mobile devices.