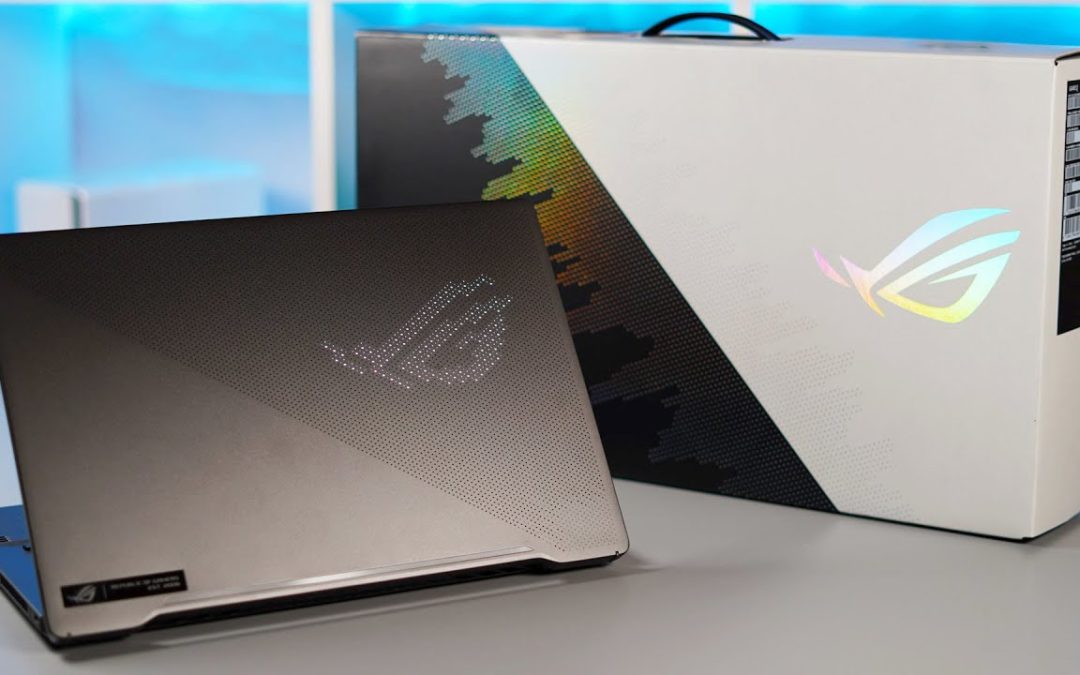 The ROG Flow X13 has been upgraded with the latest hardware for the 2022 version, powered by an AMD  Ryzen™ 7 6800HS processor and NVIDIA® GeForce RTX™ 3050 Ti laptop GPU. The ultra-slim, ultra-light  body is extremely portable, while a 360° hinge allows for console-like gaming with a controller or creating  works of art with its optional stylus. Corning Gorilla Glass protects the touchscreen, which comes in both  4K 60Hz and 1080p 120Hz options for either ultra-crisp or ultra-smooth gaming. Despite the incredibly  portable design, the Flow X13 still sports a full keyboard with 1.7mm of key travel, as well as a robust port selection including HDMI, USB Type-A and Type-C, and our own XG Mobile interface for connecting to our  ultra-portable family of external GPUs.

While the CPU and dedicated graphics are quite powerful on their own, some workloads demand more.  The XG Mobile family was introduced in 2021 as companion hardware for the ROG Flow series, offering  top-tier graphics performance and additional I/O ports when needed. With the addition of an  AMD Radeon™ RX 6850M XT GPU XG Mobile for 2022, the family is now complete and offers incredibly  powerful graphics card options from both AMD and NVIDIA. 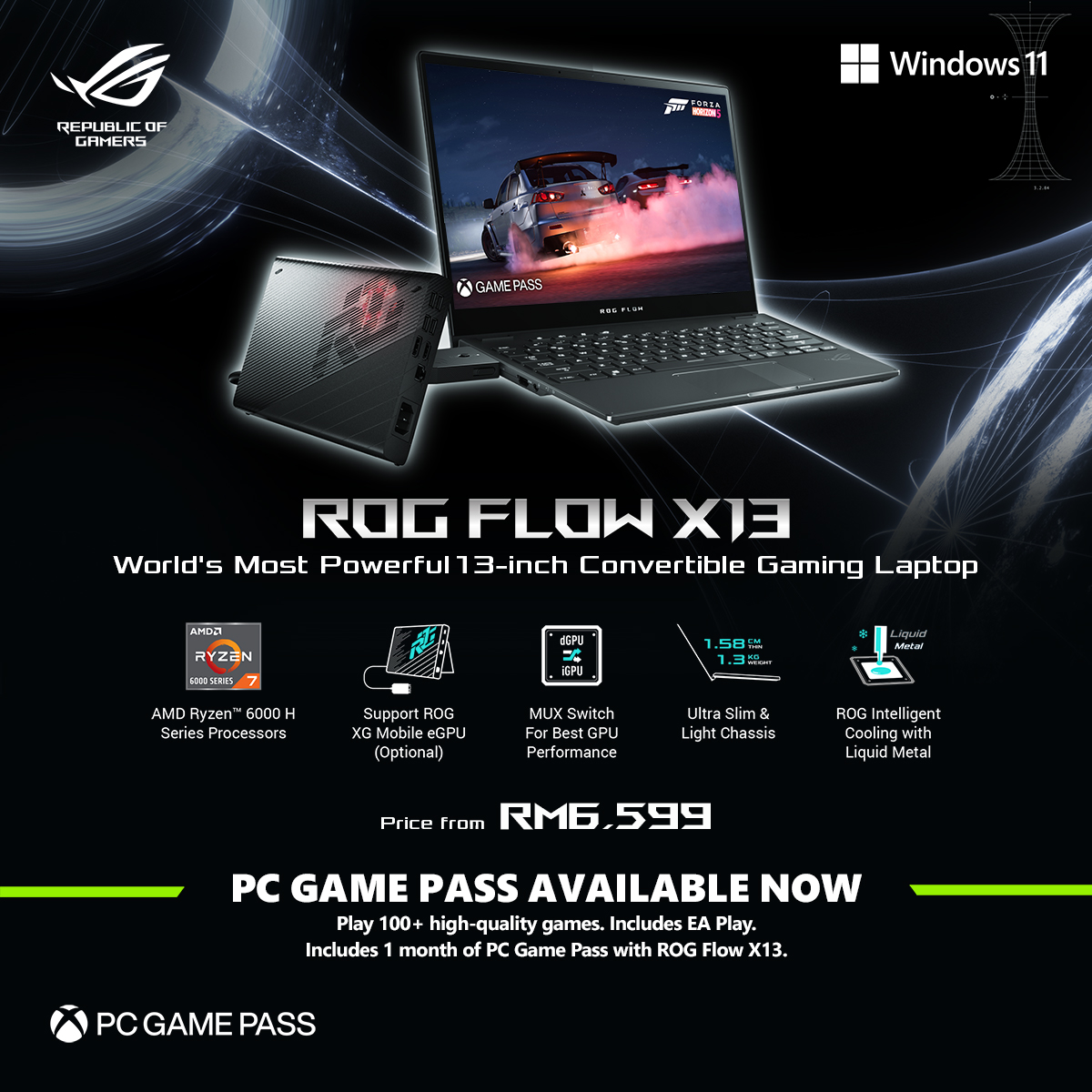 The 2022 ROG Zephyrus Duo 16 reaches new heights of innovation in dual-display laptops. ROG’s  ScreenPad Plus™ adds a secondary screen for extra productivity real estate, streaming gameplay, or even  controlling supported games like Dying Light 2. The ScreenPad Plus™ rises up and slides back to meet  the primary display as the laptop opens, thanks to a new 4-directional hinge. Compared to the previous  generation, this closes the gap between the two displays, providing a nearly bezel-less experience for true  immersion.

This Windows 11 machine is powered by an AMD Ryzen 9 6980HX CPU and an NVIDIA GeForce RTX  3080 Ti laptop GPU at 150W with Dynamic Boost for high-end horsepower, bolstered by an upgraded Liquid  Metal Conductonaut Extreme that decreases CPU temperatures by 15 degrees compared to traditional  thermal pastes. The AAS Plus 2.0 air intake created by the raised secondary screen creates 30% more  airflow above the fans, allowing these top-tier components to stay cool for better sustained performance in  games and creative apps. A MUX Switch ensures you get every frame possible in competitive scenarios.

The Zephyrus Duo offers two groundbreaking panel choices for the main display, and supports Dolby  Vision®in both choices. The first, new for 2022, is ROG Nebula HDR, which has all the specs of ROG’s  standard Nebula Display but with 512 Mini LED dimming zones, able to reach 1100 nits of peak brightness  for stunning levels of contrast and color. This QHD, 16:10 panel boasts a refresh rate of 165Hz and is VESA  DisplayHDR 1000 certified with a 100,000:1 contrast ratio. For the ultimate HDR gaming and movie watching experience, Nebula HDR is the display to beat.

The second, co-developed with BOE, is a brand-new ROG-exclusive display called a Dual Spec panel, which is able to switch between 4K 120Hz and Full HD 240Hz, allowing gamers can choose whether to  prioritize resolution or framerate on a game-by-game or app-by-app basis. Pixel Acceleration Technology  ensures lightning-fast upscaling in the Full HD mode, for crystal clear images at competitive framerates.

This incredible device also comes with ROG’s NumberPad technology on the trackpad, a keyboard with  1.7mm of travel and per-key RGB, six speakers with Dual Force-Cancelling Woofers, Dolby Atmos, Hi-Res  audio, and two-way AI Noise Cancellation to round out ROG’s flagship for 2022. Despite this much tech  and two displays, the 2022 Zephyrus Duo 16 has a smaller footprint than the previous generation, fitting a  16-inch display into a chassis traditionally sized for 15” laptops. 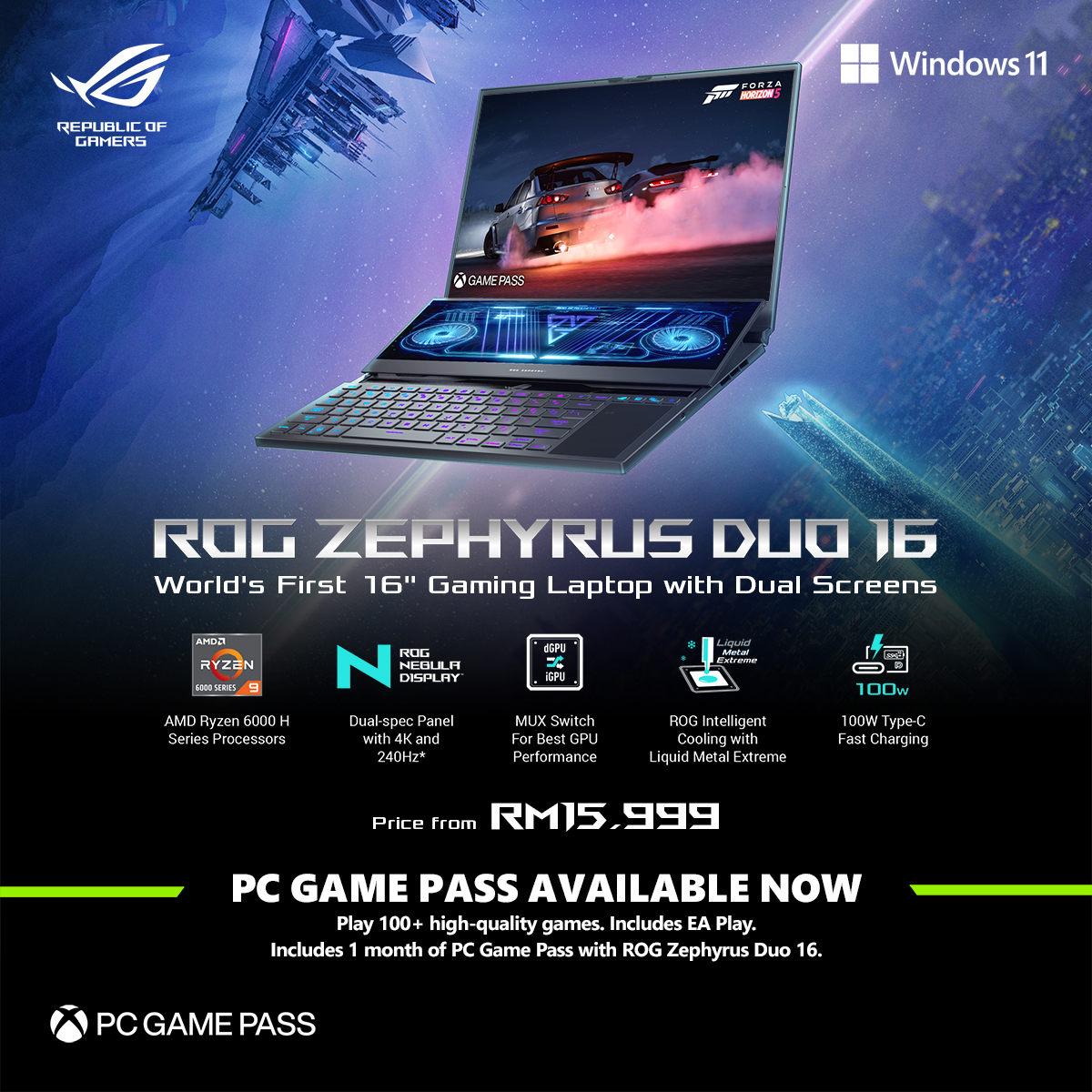 The critically-acclaimed ROG Zephyrus G14 is a powerful gaming machine in a stylish, ultraportable form  factor with a host of new improvements for 2022. The new G14 comes with Windows 11 onboard, an  AMD Ryzen 9 Series processor and AMD Radeon RX 6000S Series mobile GPUs. The laptop also  features a MUX Switch to deliver outstanding performance and the best possible framerates. ROG  Intelligent Cooling with liquid metal and a custom vapor chamber ensures excellent sustained  performance from these high-end components, while DDR5 RAM and a 1 TB PCIe SSD enable  responsive multitasking across the system.

Designed to offer premium power in an ultraportable package, the sleek G14 is available in Eclipse Gray  or Moonlight White, featuring a Prismatic Logo nameplate with a holographic, reflective hue that’s sure to  turn heads. The lid is also covered with 14,969 precision CNC milled holes with 1,449 mini LEDs on models  with the now-iconic AniMe Matrix™ display — that’s more LEDs than last year’s model, making for new  animation possibilities that customize the look of the machine.

The G14 is also one of the first ROG laptops to feature ROG’s brand-new Nebula display, which offers  120 Hz at QHD with 500 nits of peak brightness, 100% coverage of the DCI-P3 color gamut, and a 3 ms  response time — with Dolby Vision, Adaptive-Sync, and Pantone® validation for a stunning, color accurate experience that minimizes stuttering and tearing. The display has been expanded to a 16:10  aspect ratio, which increases screen real estate without sacrificing portability, since its small bezels offer  a 91% screen-to-body ratio. Dolby Atmos, a 3D mic array with two-way AI Noise Cancelation, and  blazing-fast WiFi 6E round out this portable powerhouse.

Joining the G14 are the Zephyrus G15 with a host of upgrades for 2022. The G15 comes equipped with  up to an AMD Ryzen™ 9 6900HS, and both sports up to an NVIDIA® GeForce RTX™ 3070 Ti Laptop  GPU. Zephyrus G15 features the latest ROG improvements, including a dedicated MUX Switch for  increased graphics performance, as well as DDR5 4800Mhz memory and Wi-Fi 6E support. 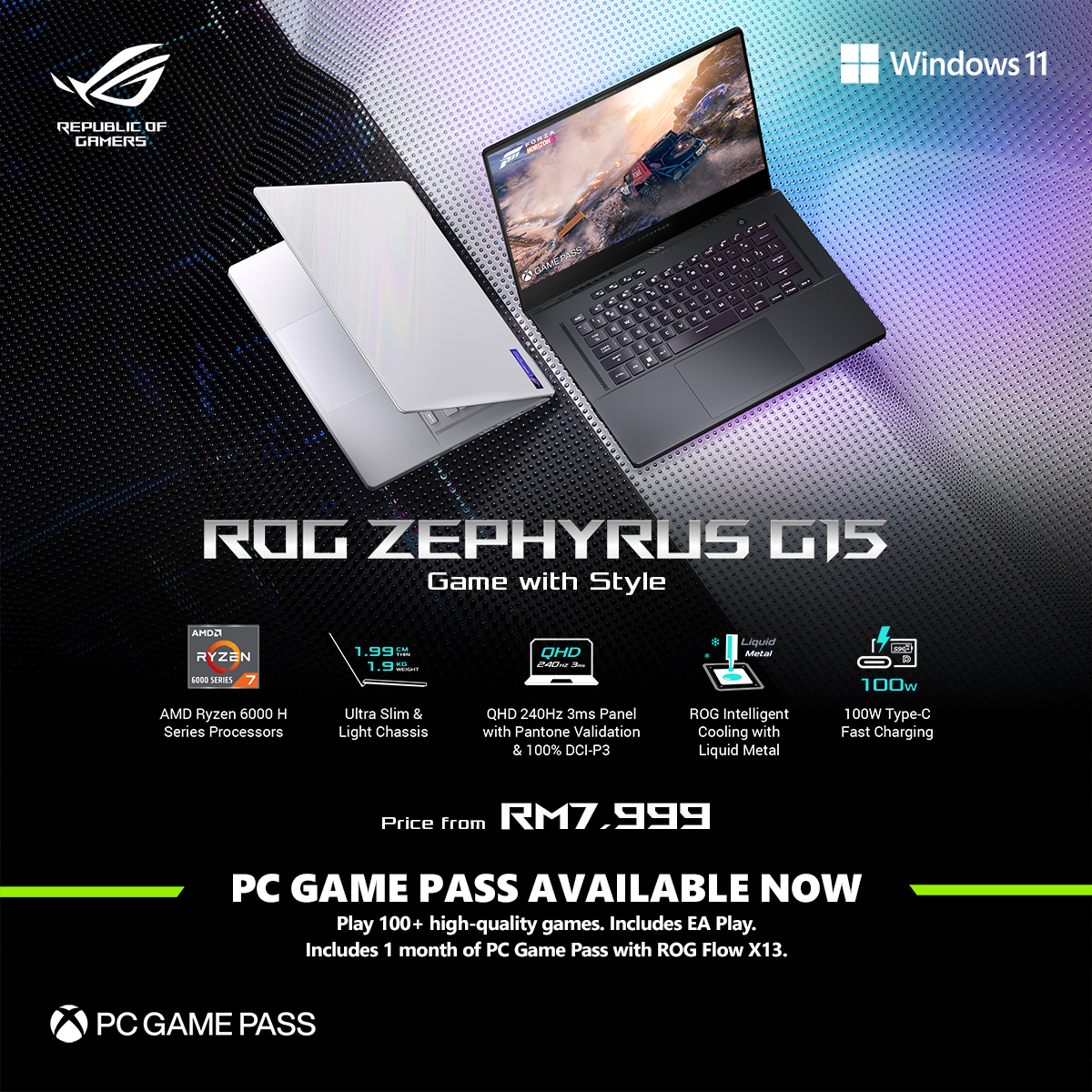 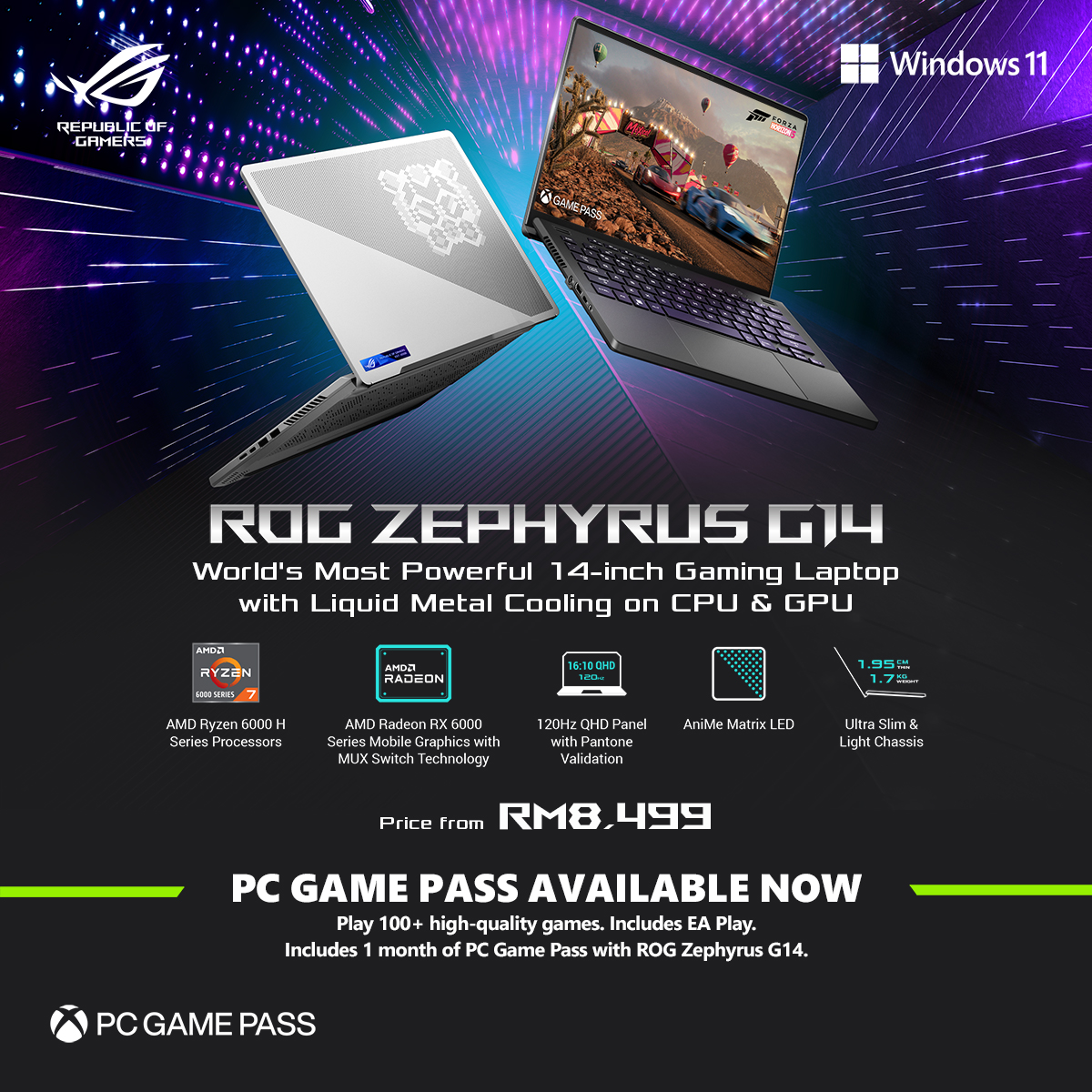