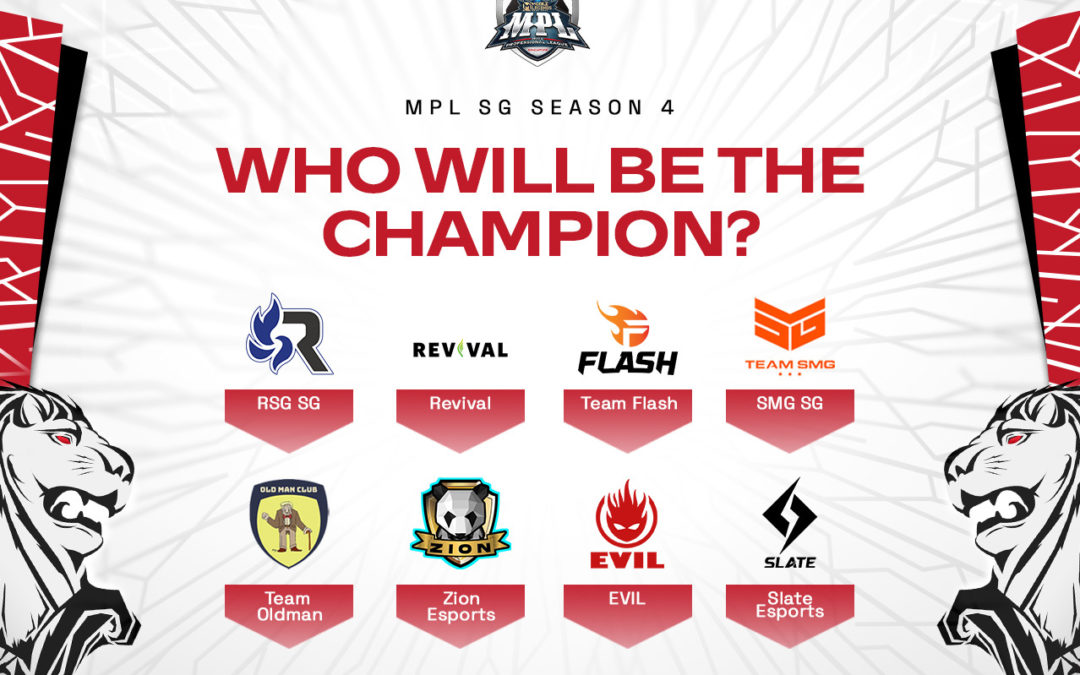 This means that for the second season running, SMG SG has reached the Regular Season by grinding  their way through the qualifiers, proving their undeniable quality. And while this is Oldman’s first  appearance at MPL SG, its members are far from unknown – this new team counts elite MPL veterans  like OhDeerBambi and Fossa among its ranks.

The two teams are undoubtedly worthy participants for Season 4, and they will join RSG SG, Zion  Esports, Revival, Team Flash, EVIL, and Slate Esports to compete in the Regular Season, which also  guarantees all involved a share of the SGD 100,000 prize pool.

The Regular Season will be played in a league format, with best-of-three (Bo3) matches held offline at  Zenway Studios starting from 3-25 September 2022. The eight teams will compete for a strong league  position to gain a favorable draw in the double-elimination playoffs scheduled for 7-9 October 2022.  The top four teams will be placed in the upper bracket and the bottom four in the lower bracket, with  league standings determining whom they will face off first.

The winner of Season 4 will qualify for the Mobile Legends: Bang Bang World Championship (M4),  which will be held in Jakarta, Indonesia, from 1-15 January 2023. The M4 is the most prestigious title  on the MPL calendar, with 16 of the world’s best MLBB teams competing for the prestigious title, and  to grab the lion’s share of the USD 800,000 prize money.

Fans will be able to catch the action live at Zenway Studios this season but need to act quickly as seats  are limited. More information on seatings and ticketing details will be released next week. Regular  Season matches will also be broadcast live on Facebook, YouTube, TikTok and Twitch:

For more information on the tournament, please refer to https://mplsg.gg/ or the media asset folder  here.

For more information on MPL Singapore and Zenway Productions, visit the site here. For partnership opportunities, please reach out to [email protected].

Mobile Legends: Bang Bang is the most popular mobile Multiplayer Online Battle Arena (MOBA) game  worldwide that brings communities together through teamwork and strategy. With over one billion  installations and 105 million active monthly users, the award-winning game is among the top 10 most  played in over 120 countries. With an extensive reach across the Asia Pacific region, the multiplayer is  available in 190 countries with an expansive global esports presence.

Established in 2017, Mobile Legends: Bang Bang Esports serves as a platform for players to pursue  their dreams of becoming esports athletes and illuminate opportunities within the international esports  ecosystem. MLBB Esports has since expanded to multiple leagues, including the MPL series hosted in  Southeast Asia. It was one of the esports games featured at the 2019 and upcoming 2021 Southeast  Asian (SEA) Games.

Founded in 2016, Zenway Productions is an award-winning broadcast production and events  management agency specializing in gaming and esports. With a management team that has over a  decade of experience in the industry, the company are specialists in creating, consulting, and curating  custom experiences for their clients. The company has won several esports and events related awards  over the years, including Agency of the Year at the Marketing Event Awards 2021.