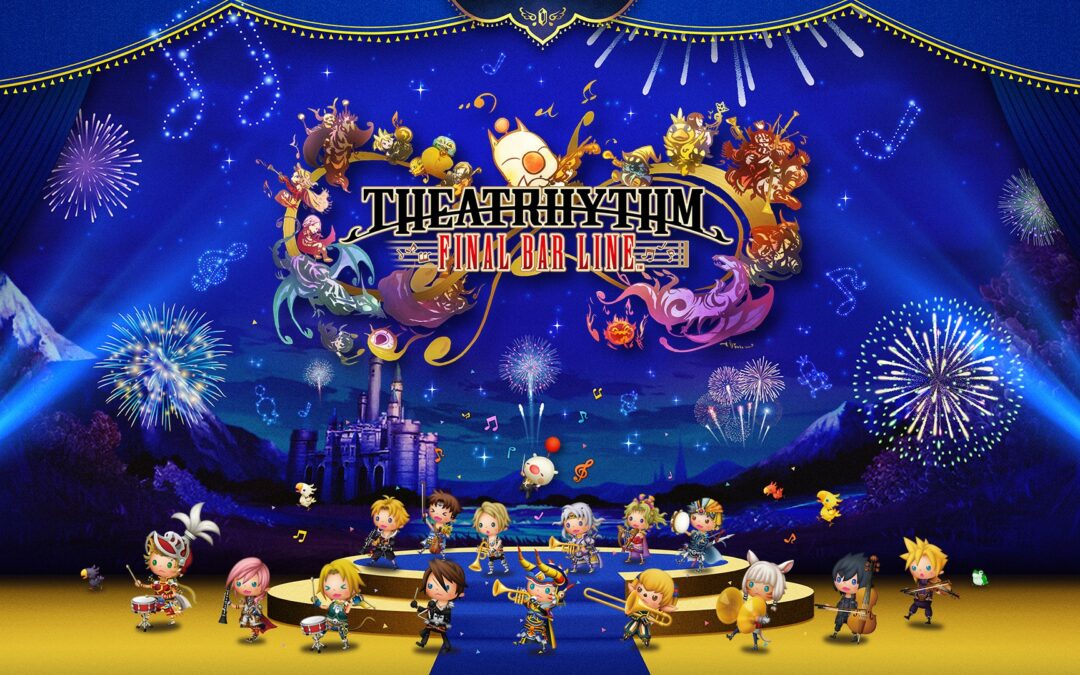 THEATRHYTHM’s latest entry in the series: THEATRHYTHM FINAL BAR LINE is an upcoming rhythm game developed by Square Enix. It is scheduled to be released on Nintendo Switch and PS4 on February 16 2023.

With 385 in-game songs, this installment has the highest volume of tracks in the history of the series! The total song track jumps to 502 when including DX versions and add-ons!

FFXIV Through the Maelstrom

104 characters appear from throughout the Final Fantasy series.

Press and Tilt to the Rhythm! 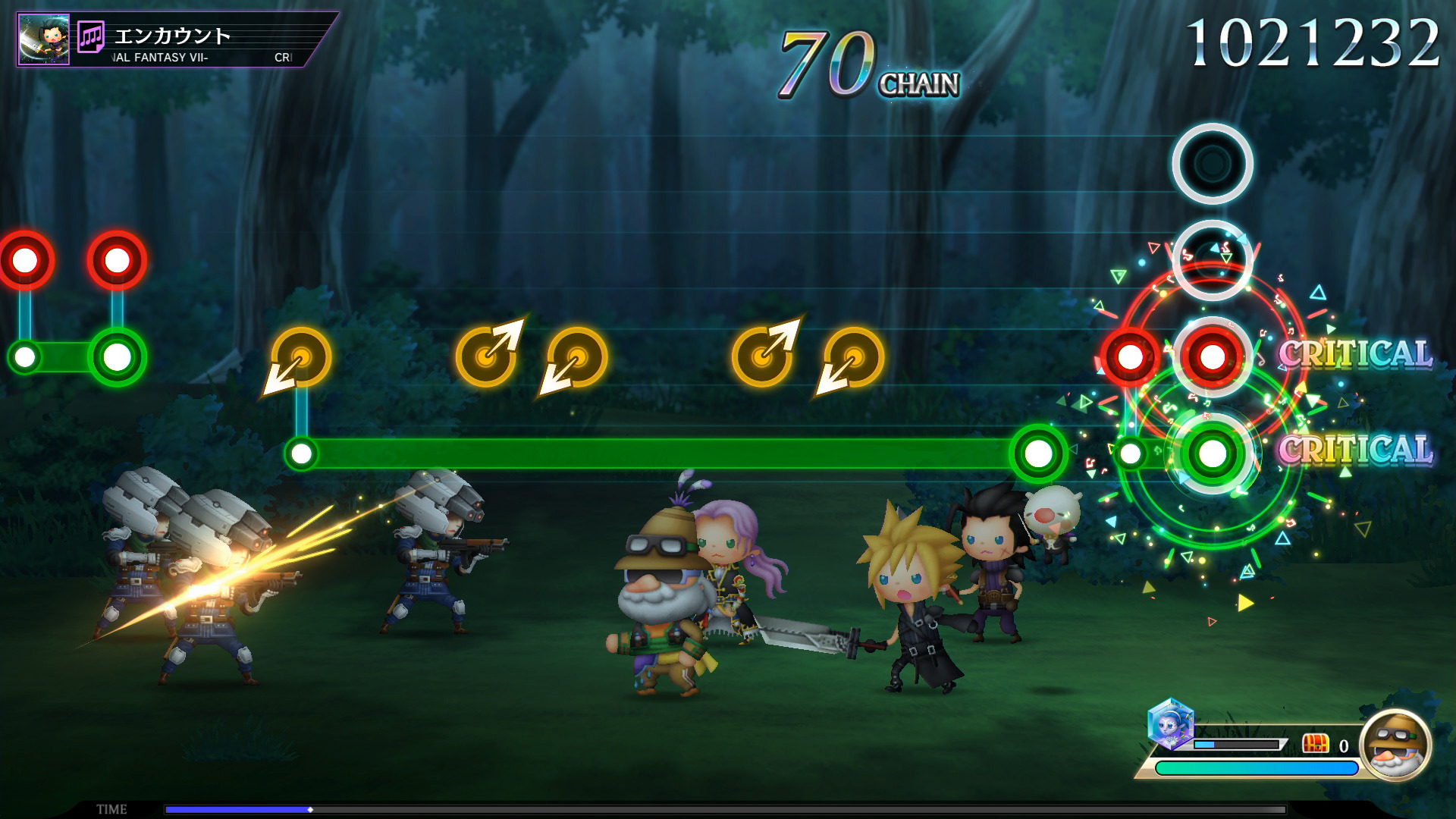 When the Triggers on screen overlap with a Trigger Mark, make your move!

The red, yellow, and green circles are called “Triggers.” When they overlap with the white circles to the right of the screen called “Trigger Marks,” make a well-timed move with a button or stick!

Simple controls make for intuitive gameplay that anyone can pick up.

There are three difficulty levels to choose from for each piece of music: Basic / Expert / Ultimate. In addition, about one-third of the songs offer the highest difficulty level, “Supreme”!

Slide Trigger: Move the stick in the direction of the arrow. Use two sticks for two arrows.

Hold Trigger: Hold a button for the duration of the trigger and let go at the end.

Hold-Slide Trigger: Hold a button for the duration of the trigger, and move the stick in the direction of the arrow at the end.

Defeat waves of enemies in time with up-tempo battle music!

Journey forth with your party to relaxing field music!

Play to the beat against a backdrop of unforgettable scenes from each title!

Choose from your favourite titles!

Relive a total of 29 past titles and unlock their songs as you go. 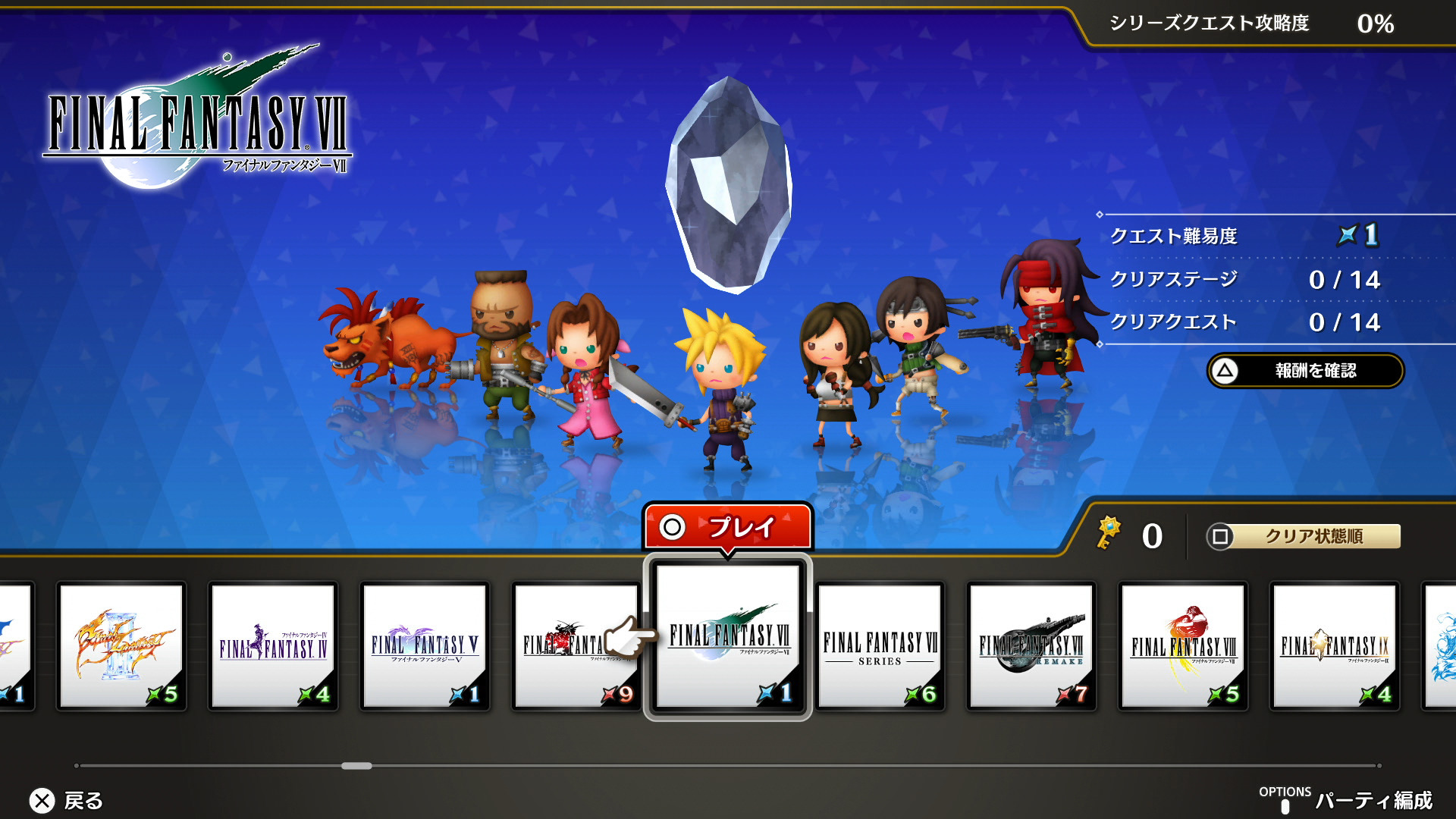 Characters associated with each title will join your team. 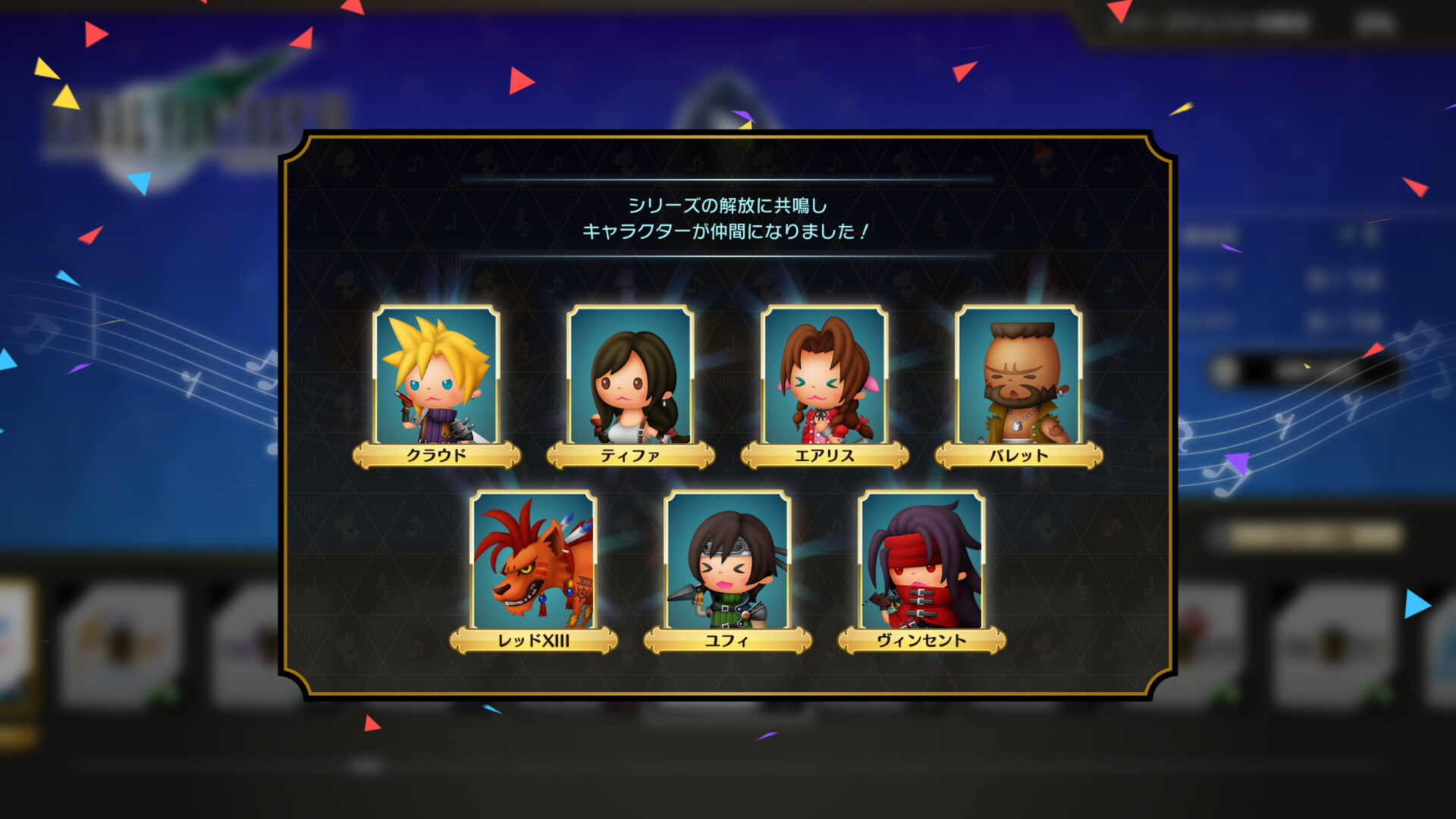 Advance through the map by clearing each stage!

Each song also has its own quest, such as “Defeat 10 ‘Bomb’ enemies,” and songs cleared in this mode are unlocked to play in Music Stages. 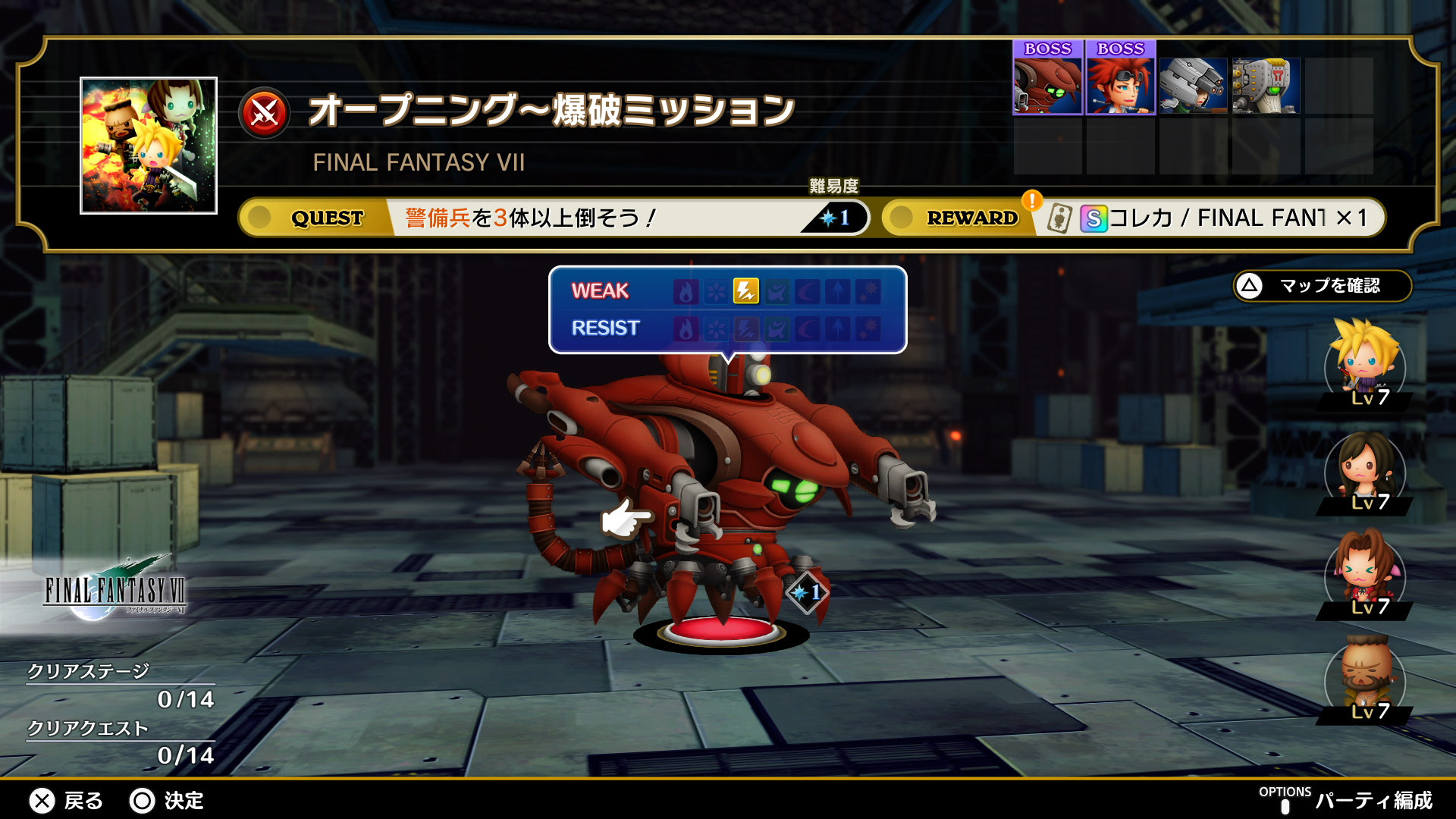 Form a party with your favourite characters! You can have up to four characters of your choosing in your party.

You can set up to three abilities for each character. There are various types of abilities, including attack and healing, as well as character-specific abilities.

Call forth summons in a Battle Music Stage by setting a summonstone. Summonstones come with random bonus effects. Try to get your favourite summons with better and better effects! In addition to characters and summons, you can also change moogle styles and airships. Neither affects your stats or gameplay, so set whichever moogle and airship you think looks best. 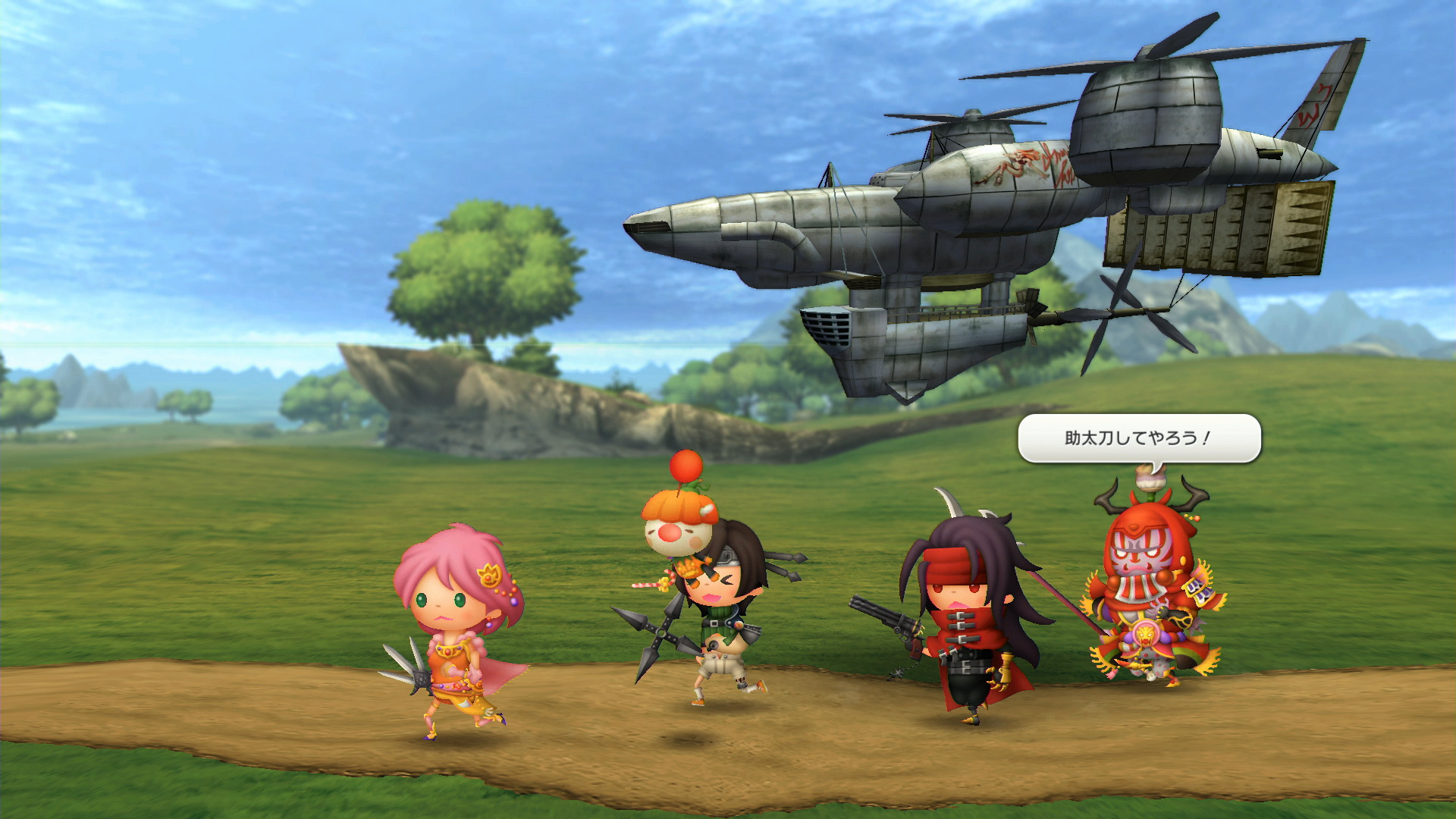 A Total of 104 Characters Appear from the Final Fantasy Series

Characters can be obtained by unlocking their associated title in Series Quests. You can also obtain enemy characters by clearing the final stage for each title!

Characters can be obtained by unlocking their associated title in Series Quests. You can also obtain enemy characters by clearing the final stage for each title!

There are various ways to play, including a simple one-button play style, a pair play style allowing two players to play with one screen, and online multiplayer matches up to four players.

After the game releases, a total of 90 songs from various other titles, including the NieR series and CHRONO TRIGGER, will be available as DLC! The Deluxe Edition includes 27 exclusive songs, including “Eyes On Me” from FFVIII and “Zanarkand” from FFX.

The World Ends with You Series Pack (6 songs)